The day started with me nearly miss the train down to Västerås where I should meet up with Anders and Åsa; but that worked out good with a 4 minutes marginal. After arriving on time I just have to wait for my friends. Dinner at McDonald's before we did go to Good Morning Hotel at Arlanda, and there the theme for this trip started "cold" Anders and Åsa had one room, Fredrik that arrived earlier had one room and I had one on my own. Of some strange reason the heater was turned off and the window was open in my room, only my room, and about 3 degrees outside? Because I didn't want to carry so much heavy things I took just my down jacket. 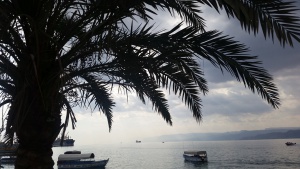 At 4am it was time to get up eating breakfast because our plane was departure at 6am for Istanbul. In Istanbul we has 11 hours to take care of before our flight so we did go downtown and made som shopping at the Grand Bazaar (Büyük Çarşı), and f ofcourse visited an mosque, the Beyazit Mosque Istanbul did brilliance with 6 degrees.

We landed at 3am in Aqaba and took a taxi to the Days Inn hotel, the problem was that we didn't have a room until after 8am so we got permission to sleep at the couches in the lobby area. After checking into the rooms Anders and I did some geocaching but it didn't work out well. The rest of that day was about to get to know the area and some shopping. Still cold so i had to buy a sweater to wear under my down jacket, just when i done that and came back to the hotel some norwegian couple was promoting the taxidriver from yesterday because Anders invited him to the hotel because we were about to get to Petra

This is my best friends birthday and thats also the main reason to the trip. We started the day with breakfast before we got picked up by that traxidriver (Omar) to get to Petra and Wadi Rum I started to think how it would be to live there in the canyon (I liked that better than the monuments) After the lunch with almost cold food we were heading towards the desert, even there it was a canyon, but when we were as deep as we could walk there was some rumbeling sound and one of the guides got scared and told us to run out of there because he thought it might be falling stones that could kill us. During the drive that driver got to know it was Anders birthday and said that he should bring a cake which he did when we ate dinner.

This day was a soft day, we did take a glass boat to look at the coralreef but it was not that big deal in that boat.

Better luck this day, we booked a better glass boat that worked like a semi submarine and were out for 3 hours and also got lunch at the boat so it was really nice.

The last day in Aqaba, time for our self, I was going downtown to shop and started to talk to one of the house keepers in the hotel, the face expression when i told her i had the same job as her was something like "I really don't believe you" haha 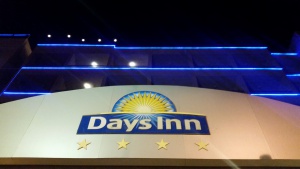 1am and time to leave Aqaba with a taxi to Amman because the original flight got cancelled because of snow in Istanbul, so we had to look forward to 5 hours in a taxi with almost no space for the legs in the middle of the night when you are supposed to sleep. Me, Anders, Åsa and Fredrik arrived at the airport at 6am and at 8am me and Fredrik was in the air towards Qatar Anders and Åsa was instead of going to Sweden, going to Cyprus for a few days. The airport in Qatar is nice, probably because they have a lot of money there, a cup of coffee, a small cupcake and a small water cost me 50QAR = almost 14 dollars Well time to board next plane toward Sweden and Arlanda and wait for the night train taking me home to Östersund

7.30am i woke up from someone taking on my leg, telling me that those seats were booked. Newly awake i said sorry while I in the same time saw the trainstation sign tellingme i was in Östersund, so i got in a real hurry getting off the train, and like the description i got back when i was trying to explain 25 C cold to one of the house keepers, yes its like hitting the wall with you head, especially when your almost not awake.